The Psychology of a Knife Collector

The intricacies of individual personalities vary from person to person, as no two people are exactly alike in regard and fashion. The demeanor, habits, characteristics, and mentality of individuals are shaped through interests, histories, experiences, dislikes and habits. One of the unique habits that is formed from this list of wide variables is collecting. In fact, collecting is an incredibly common practice that is rooted in a number of different factors. Whether someone collects memories, souvenirs, beer coasters, trophies, diplomas, baseball cards, or knives, collecting seems to be a standard practice among people around the world.

My knife collecting goes way back; when I was a child, I fell in love with the shape, function, and elegant design of custom knives, foldable knives, collectible knives, and every knife in-between. I remember my first custom knife purchases: they were of the combat variety, purchased from Shiva Ki and Phill Hartsfield. Soon after these purchases, I delved into the world of bladesmithing and knife collecting. I became serious about my own knife collecting around 1987, where I began my apprenticeship under the longtime bladesmith Martin Kruse. Around this time, I also attended classes held by the American Bladesmith Society (ABS) and worked with Al Barton soon after I moved from L.A. to San Diego. 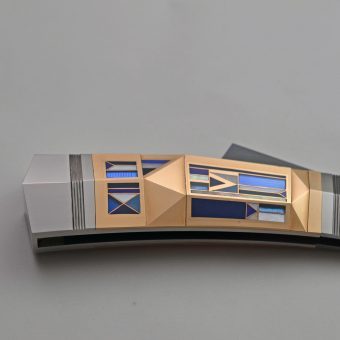 Al and I received our journeyman stamps for the ABS the first time we both took the test. In 1996, Al received his Master’s stamp, while I received mine in 1997. I surmise that any collector’s object of fixation lies in their passions and their past. For me, it was a childhood love of knives.

The Motivation for Knife Collecting

Collecting can be a motive to preserve the past and to hold on to a deep love of a subject. It can be an obsession, or something molded out of pure enjoyment and love for the craft. Collecting can also be a way to connect with other like-minded individuals; for example, my love of knife collecting has opened many doors and contacts in the custom knife collecting world, which seemed to be the most logical decision when I began collecting specialty items. Collecting can be a quest, a motivation, and a passion to chase an identity, a purpose, and a certain level of satisfaction.

Custom knives – in my opinion – are beautiful and exquisite works of art that symbolize the individual talent and personality of the knife maker or bladesmith in question. Custom knives speak to the ingenuity of human beings, while also demonstrating a masterful degree of precision and meticulousness.

My love of collecting has led me here. On this website I carry knives from some of the best knife makers in the world: Bob Loveless, Ron Lake, Bill Moran, Buster Warenski, Jim Schmidt, and Salvatore Puduu, just to name a couple. These gorgeous knives are adorned with beauty, grace, intricate detail, and only the finest materials. I have been incredibly successful at unearthing extremely rare and hard-to-find pieces for my customers, and my love of the craft has enabled me to do so.

I greatly appreciate your time and I hope you enjoy a thorough examination of my knife collection. If you have any questions or wish to talk, you can reach me at (760) 945-7177. I accept consignments on a strictly limited basis, but I welcome any inquiries or offers. Thank you.