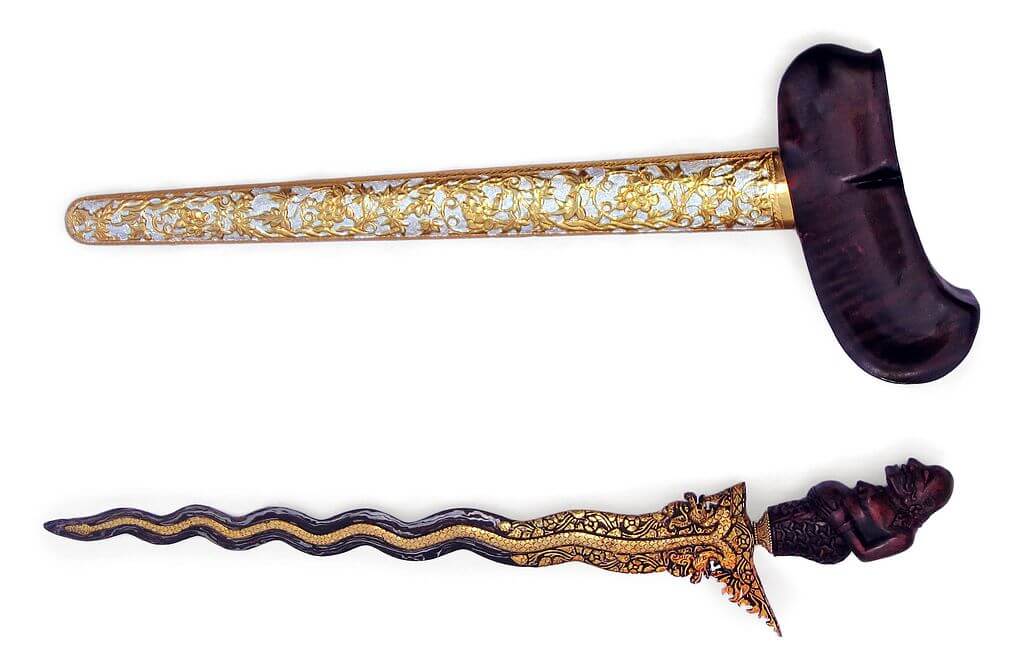 Throughout history, mankind has constantly created new instruments of war and survival. As technology has advanced, so has the way we fought wars. Long gone are the days of armor-clad swordsman charging into battle to defend their sovereign nation. Modern wars are fought with such an extensive array of new technology, that sometimes combatants don’t even see each other. Wars can be fought from behind a keyboard and monitor using drones and other unmanned vehicles. Though technology has changed the modern battlefield, nothing has stood the test of time as much as the combat knife. An absolute must, both in terms of defense and utility, knives are a common tool used both on and off the battlefield. Bladesmithing has become an artistry, with the beautiful work coming out of artisans such as Bill Moran, Bob Loveless, Ron Lake, Buster Warenski, and Jim Schmidt. History has brought us some fascinating knives, and we’re going to take a look at a few of them.

Of Javanese descent, the kris, or keris, is an asymmetrical dagger with a distinctive pattern on its blade. While the kris is mostly associated with the culture of Indonesia, it is also native to Malaysia, Brunei, Singapore, Thailand, and the Philippines. Mystical in appearance, the kris is seen as both a weapon and a spiritual object.  There were a series of kris forged from astral iron mined from a meteorite that fell roughly 200 years ago near the temples of Prambanan. These weapons, and what remained of the meteorite they were forged from, were considered highly sacred objects. Pregnant with symbolic mysticism, the curves of this blade hold the rich history of a tropical nation.

Kris knives are objects of fine artistry, often carved in meticulous detail and made from different materials such as precious metals, rare types of wood, ivory, and gold. The curved, almost slithering shape of the kris is associated with the naga, the great snake-like deity found in Indian religious mythology. As a spiritual object, they are often considered to be imbued with an essence or presence and possess magical powers, with some blades possessing either good or bad luck. They are used in many different respects, as weapons, as talismans with magical powers, as sanctified heirlooms, auxiliary equipment for court soldiers, an accessory for ceremonial dress, a symbol of heroism, an indicator of social status, or simply just to display its beauty. Indonesian folklore mentions legendary kris that possess supernatural powers and extraordinary abilities in tales such as Empu Gandring, Setan Kober, and Taming Sari.

The history of the kris has been traced through the study of bas-relief panels and carvings found throughout Southeast Asia. The earliest kris prototype can be traced to the Dongson bronze culture found in Vietnam around 300 BC that made its way throughout Southeast Asia. Many kris are forged using various types of steel with varying carbon content. This style of mixing steel is known as pattern-welding and creates an effect similar to the infamous Damascus blades. However, pattern-welding is an entirely different process, and while a kris forged this way will retain a similar appearance to the Damascus blade, they are very different in chemical composition. The various patterns created by blacksmiths were believed to protect the weapon’s owner and ward off bad fortune.