Famous Knives: The (Non) History of the Bowie Knife 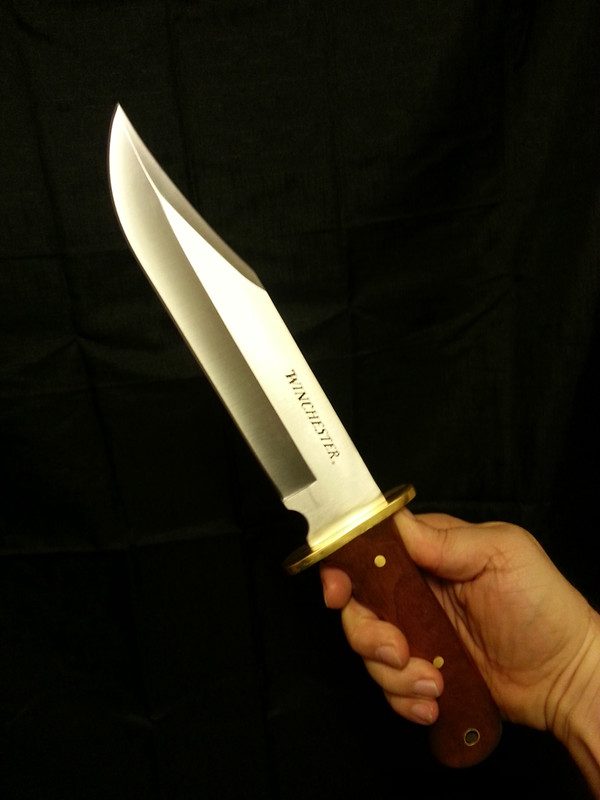 The Bowie knife is a legendary knife that has been seen all over film, television, books that name it. You don’t need to be intimately familiar with the knife world to know the name “Bowie”. To accurately dive into the full historical details surrounding the tale of Jim Bowie and the knife battle at Vidalia Sandbar, as well as the subsequent events, could take a whole book. You see, many of the historical details surrounding Jim Bowie and the knife bearing his name are exceptionally unclear and not at all consistent across eye witness accounts and historical documents. But perhaps that’s what makes it so interesting, what we have is a bonafide myth.

What is a Bowie Knife?

A Bowie knife is a large, fixed blade knife that was created by James Black. The Bowie knife design has developed many characteristics up until now, where a modern Bowie will almost certainly feature a clip point and crossguard as well as many stylistic quirks unrelated to function. That being said, even the design of the knife in the early iterations was difficult to quantify as something unique or specific, as many knives had both crossguards and clip points.

Black was an American knifemaker who is often attributed to the creation of the Bowie knife. Like much of the story surrounding Jim Bowie’s fight at Vidalia Sandbar, every aspect surrounding Black’s knifemaking seems to have many attributors and detractors to the veracity of the history.

The Fight At The Vidalia Sandbar

The Bowie Knife is technically a knife inspired by the legend of another knife. Jim Bowie was a famous American pioneer who met his end at the Battle of the Alamo. He is also a figure shrouded in much mystery and historical embellishments that can neither be confirmed nor denied.

The incident that made him famous is the Vidalia Sandbar fight, a fight that took place on a large sandbar on the Mississippi River. The brawl ended up turning into a melee—and Bowie had been shot and stabbed. He had sustained grave injuries yet lived somehow, while also injuring a few men and killing another who had made an attempt on his life. Bowies reported use of a large knife in this fight was an object of attention during the recounting of the story thereafter.

Bowie wore an extremely large knife in a sheath in the time after the sandbar fight. Being a pioneer, and the infamy surrounding his brawl at Vidalia sandbar, the knife came to be a symbol of the frontier lifestyle. This was further reinforced when (allegedly) 3 men were sent to assassinate Bowie in Texas and he ended up killing all three of them with a modified Bowie knife made by James Black. The original knife’s origins are unknown as well, some people attribute the design to notable knife makers of the time, some to Bowie himself, and others to Bowie’s brother, Rezin Bowie.

James Black is typically attributed to creating the modified Bowie knife that would result in a lineage of changes leading up until the modern era, well beyond the date of his death. Black’s knives were notable for being extremely tough and but also providing sufficient give. Unfortunately, the technique Black used to create his knives were lost—by the time he had attempted to pass the trade on, he had reportedly forgotten some of the process

Exquisite Knives loves everything about knife collecting and the knife world at large. It’s interesting to see the history behind some of the most famous knives of our time. You never know what knives of today will be the history of tomorrow, that’s why we’re deeply invested in procuring, selling, and appreciating custom knives that have been made by some of the best knife makers of today—as well as those who have passed on.

Visit the Exquisite Knives shop today to take a look at our fine selection of highly curated custom knives from famous, as well as up and coming stars.

Social
« What Makes Folding Knives So Popular?
3 Common Blade Shapes and What They’re For »