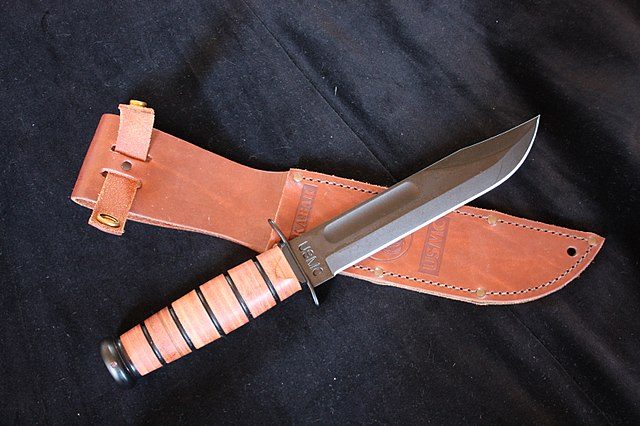 In American popular culture, there are a startling number of things which have their origins in the United States military. From undercut hairstyles to bomber jackets, and the topic of discussion today: The Ka-Bar combat knife. If you are a passionate knife lover and knife collector, there’s almost no chance you don’t know about this legendary and iconic knife. It is one of the most famous fixed blade knives in the world. Without ado, let’s dive right into where this knife comes from and where it’s at today!

Origins of the Ka-Bar Knife

The Ka-Bar knife is as widespread and well adopted as anything could be in the US Military. The knife has a legendary status as being involved in tales that range from harrowing to heroic and everything in between. The Ka-Bar is usually present, mentioned or not. How did it get to this point?

It began with what can be described as a general dissatisfaction at the lack of versatility in the Mark I trench knife. It’s not that the Mark I trench knife was a bad knife, it was actually a rather expensive knife to manufacture for the time. The issue was that it was ill-suited to the purposes that soldiers required and for the situations they found themselves in. The brass knuckle guards were reportedly a major limiting factor for gripping the knife in combat situations should things turn ugly and get into close-range. It was also difficult to carry as the guard made it troublesome to sheath into the scabbard.

However, the aspect of the Mark I that caused the military to seek out other options was that the stiletto-like blade was highly unsuited towards utility tasks such as cutting wires, opening rations/cans, as well as using it as a make-shift crowbar to open supply crates. Many knives failed under such conditions (meaning they snapped or were rendered unusable)

The military put out a request to all knife makers to create a knife suitable for military use. After sorting through several options, they arrived at what would be later known as the Ka-Bar knife—the initial prototype was called the 1219C2 and was the result of a partnership with Union Cutlery. Through the suggestions by USMC Colonel John M. Davis and Major Howard America, the fighting utility knife was born. By 1944, the Ka-Bar was completely integrated into the Marine’s toolkit and was also being extensively used in the Navy despite the fact that the heavy leather handle did not last when exposed to salt-water conditions.

Why Is It Called The Ka-Bar?

The name Ka-Bar dates back to 1924—a full 20 years before its widespread inception into the military. Ka-Bar is the stamp of branding on Union Cutlery knives. The story goes that in 1920, the leader of Union Cutlery Company, Wallace Brown, received a package from an Alaskan hunter stating in an enclosed letter that during a vicious bear attack, his rifle was knocked out of his hands but he had managed to slay the bear using their cutlery.

The legend goes that the letter was smudged to the point to where the only thing legible was the letters K A and bar, and that is how Ka-Bar was born and trademarked thereafter. However, their own website spells the story out a different way, stating it was a marketing decision based on merging pronunciations between Kodiak and bear. Which of these stories is true is something I do not know for sure, but that is often how these tales go.

The Ka-Bar is no longer the defacto knife in usage within the military. Knives like the M9 bayonet and OKC-3S bayonet see heavy usage in everyday military endeavors and combat operations. However, taking one look at those knives one can see the influence and heritage of the legendary Ka-Bar fighting utility knife. Instead, this knife is seen more on outdoorsmen and hikers more than anyone else. The legend of the Ka-Bar knife is well spread through popular culture, and for many it represents one of the ultimate fixed blade knives in terms of ruggedness, grit, and reliability. It’s fairly large stature and commanding presence makes it a common gift for knife lovers, knife collectors, and promotional gifts for military personnel.

We hope you enjoyed this post on the history of the Ka-Bar knife, Exquisite Knives is dedicated primarily to rare custom collectors knives. More than that, this blog is a love letter to all things concerning knives whether they be highly sought after knives from legends such as Bob Loveless or from hot newcomers like Argentina’s CAS Knives.

If you have any questions about any of the knives featured on the site, please do not hesitate to contact us. We love hearing from other knife collectors and aficionados!

Social
« The Master of Collectors Art Knives: Buster Warenski
What is Damascus Steel »